I’m a great believer in “signs”.

In all seriousness.. there are times when I am pondering something.. a problem, a situation… and I will ask the Universe to send me a sign.  It could be a song on the radio.. an object.. or a literal sign.. like a poster or something.

I’ve seriously had situations where I’ve say, been thinking about a personal situation and asked for an indicator.. and suddenly, in front of me,  the person I’m thinking about’s name plastered on the side of a truck or something. 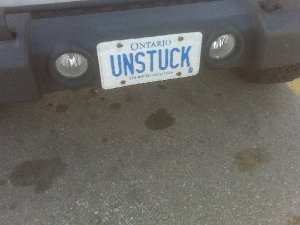 Or I’ll be in the car and worried and ask for a song as a sign that perhaps I shouldn’t give up hope.. or something to point me in the right direction.. and a specific song will come on..

Now, I have some friends who mock me for this.. and they can all they want.. their prerogative and all.. and yes, I’m a little crazy (but hey, I just let the crazy out in little bits…) But, with the songs for example, I will “ask” for very specific songs, or a particular artist.  Recently I was pondering something and a “special” song came on the radio.. it’s an album cut so it’s not likely to be heard often.

Within a couple of days I heard that song.. ON THE RADIO.. 3 times.  And on different stations. Very odd indeed.

On more than one occasion I’ve been driving along and asked for a “sign”.. and then run across a license plate that held a special message for me… One day I went to a mall that I don’t usually frequent.. thinking about a problem.. and in my head asking for a sign/solution/guidance… what have you.. I pulled into a random parking space .. and the car in front of me had the license plate UNSTUCK. Well, that word speaks to me.. I’ve had many discussions with a couple of friends about being “Stuck”.. not being able to move forward in some areas of life.. and we all agree it’s up to the individual to get themselves “UNSTUCK”.. I have taken that as a sign to get my ass moving…

I was out for a walk the other day and came to a realization about a situation.. right afterward, a car drove by with the license plate “EPIPHANY”. Like, seriously, what are the chances?

So.. keeping this in mind..

My daughter and I see this one guy EVERYWHERE.  He has a pretty distinctive “look”.. earrings, a goatee, wears a hat.. usually dressed in black.. looks like a band guy.

We first ran into him at a bar downtown.. then we’d see him at another place we’d pop into on occasion.. then riding his bike (yes, I realize that if people kinda live in the same area, you’re bound to run into one another.. but still..).. then another place we went for dinner.. and another and another.

Katy and I stopped for a beer at Ethel’s on Friday night.. and in he walks… sits right behind us with his book and his beer.. and sat there reading.  I was seriously contemplating that perhaps he was stalking.. I mean, how often do you run into the same person over and over?

A couple nights later, we decided to pop into the Boathouse for a pint… we’re sitting there and in he walks again!! This was getting a little too weird..   Katy, (please note that there was some liquid courage involved).. decides that THIS IS A SIGN. Maybe, we are supposed to be friends with this dude.. maybe he’s super cool and we should hang with him…????

We watched him head out for a smoke and she decided we should follow him.. he was with a couple of other people.. so she waited for a break in the conversation ….  She said hi, introduced herself and explained that we keep seeing him all over town.. he replied that yes, he’d noticed us too.. particularly a few nights earlier at Ethel’s… he was apparently admiring my jacket.

We then proceeded to have an incredibly inane conversation.  Ok, I’m being harsh. But.. yeah, dude was no where near as cool as we had built him up to be.. he had the look going on, but he was pretty boring and monosyllabic.  He wasn’t a musician (I can’t remember what he said he did..) seemed nice enough.. but.. whattayagonnado…?  The conversation was not scintillating. We were kind of disappointed, to tell the truth.

As we left that night, Katy exclaimed “YEAH. That TOTALLY was not a sign! Plus, now when we see him we might have to hang with him…” LMAO.  Well, at least we made a new beer buddy.

As for my signs.. I’ll stick to hearing them on the radio… 😉

Life: Things are going well… thanks for asking
Love: My horoscope claims that things are going to “heat up”.. .hmmm
Pants: I hope I get new pants for Christmas as pretty much every pair I own are too big. I’m not complaining though…