I just noticed today that I had surpassed 100 posts.

That’s a lot of words.  It would appear that I have a lot to talk about.. Or more likely I’m just longwinded ..a bit of a babbler..

Regardless, I was taking a look at the original reasons that I started this blog… and thought I’d see how much I’d “progressed”.. if at all….

So, to revisit.. Here are what amounts to my New Year’s resolutions.. and thoughts on the same… 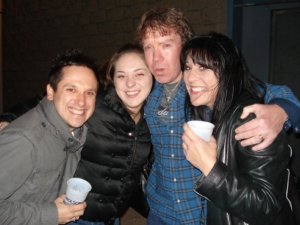 one of my many recent adventures.. this was Oktoberfest.. good times!!

I, unfortunately, have not become a game show host. I KNOW! What a waste!  However, I have discovered that my ultimate goal is to be a writer.. well, I’m already a writer… but I mean write and get paid for it… like, huge money.. . You know, be on Oprah and stuff.. … Now, as far as the job dealio is concerned, I haven’t secured a traditional 9-5 thing.. which is great.. because I’m really not a 9-5 type of chick.. One thing I’ve discovered is that I like working from home.. or wherever I happen to be.. and also like to work at weird hours (that’s the bohemian creative thingy there methinks..)  So, I’m doing some consulting work.. which is very, very cool. I like it.

I DID move.. to St. Catharines.. to live with my BFF Jodi.  Which is awesome because she rocks.  However, ultimately want to be back in the K-Dub.  I love Kitchener-Waterloo. A LOT.  Big fan.  I am saying aloud that I plan on being back by February.. putting it out into the Universe, so to speak.. gonna make it happen!

This is a tricky one. You see.. I haven’t been ENTIRELY truthful when it comes to the “love” section of the blog.. well, I did take myself off all the internet dating stuff.. mind you, I had a relapse and went back on for a bit.. Chatted with a few guys.. but.. really didn’t have any interest in meeting most.. met a couple.. and.. yeah, not so much. And, removed myself again.

And I’ve rethought this actually.. I guess I don’t so much want a “boyfriend” as just a social life.. which I actually have!! I’ve had a lot of fun lately.. meeting new people and doing fun stuff with some great friends. And really.. fun is the operative word.. I mean, I could “have a boyfriend” if I REALLY wanted one.. I get asked out and stuff. . but.. I want the “right” guy.. ..smart and funny.. Should I be cruising the Perimeter Institute? Comedy clubs?

I know there’s a guy out there for me.. the Universe will send him my way when it’s the right time.. 😉  So I’m in no rush.. and not worried about it. Obviously whoever he is is just not ready for me yet.  After all, I AM a lot to handle….  I’ll just have fun in the meantime!

This one.. I’ve been.. pretty good with.. I have been eating less crap.. and have been getting more exercise (really should do more crunches though..) I walk dogs for about 60-90 minutes a day (about 5-6K) and all my pants are too big.. so that’s going pretty well. Less liquor?  Well.. ..  let’s put it this way.. if I DIDN’T do all the walking, I’d likely weigh about 300lbs…

So I actually think I’ve done pretty well with them… I’m happy with my progress. But… still working on it and it’s getting better every day…

Life: It’s all good!
Love: I love my life, my friends, my family….. and Kitchener-Waterloo!
Pants: As I said.. they’re bigger.. I’ve moved in a belt notch and just last night a friend told me I was looking skinny. Yay!