“I KNOW WHAT YOU DID LAST SUMMER… “

You know that movie about 4 teens who end up getting stalked by someone after they run over a guy and dump his body in the ocean?  Yeah, my summer was kinda like that. 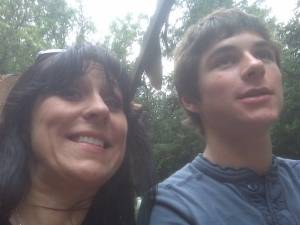 roller coaster ride. Obviously before I suffered brain damage. Wait, look at that smile. May be after...

No, no you won’t know if that’s what EXACTLY happened until you read this post. And I won’t tell you till the end if I actually smushed a guy like in that movie…or if I just mocked something till they wished I had smushed them.  And don’t skip to the end. The program tracks those who do. Which may or may not be how that guy may or may not have ended up  in the ocean or perhaps just with hurt feelings…….

I recently noticed that summer was over and I felt like it had passed me by.. as if I hadn’t really DONE anything this summer.. so I made a list..

In early June it was my son Josh’s birthday.. the lovely boy turned 14. He’s taller than me now. Guess the “I’ll put you over my knee” threat no longer is valid. We went go-karting. I gave him money. Good day. We also played Rock Band.

Mid June brought UpTown Country.. great festival put on by a fun group of people. Shout outs from the stage from Sean Hogan and lots of hugs from people I hadn’t seen for a while. I miss y’all too.

End of June.. Josh in his dark suit and Chucks’ graduated from Grade 8.  I am a proud mama.

Jodi the BFF’s birthday –  we celebrated by going to see the Fray with the 3rd Super Exciting Friend, Fernando.  Thankfully, we spent much time in the lounge as the Fray is pretty near as depressing as Coldplay and therefore sorrows needed to be drowned.  On the way back to the car, we were nearly attacked by seagulls.

with my cousins in Pembroke. SO much fun

Josh got a really bad sunburn that resulted in the nickname “Lobster Boy” for at least a week.

Finally moved out of Barrie.  My big send off involved myself and my new friends via Twitter.. Robb M (@astroboy) and Jon (@JonAston) getting together for a drink.. or several.  I believe we found the answers to world peace, Peak Oil, how they get the caramel in the Caramilk bar and whether or not Britney’s breasts are real.  Of course, there were several beers and dirty martinis and all of those answers have been lost….

July 15th. Moved from Barrie to St. Catharines to live with BFF Jodi. Thank God for Fernando and Joe and their amazing packing skills.. and for Jodi for not punching me when I brought so much stuff to her house..

Josh and I took a trip to Marineland and determined that we should get season passes which requires not only pictures, but  fingerprinting and a brain scan.  Apparently there have been issues with identical twins borrowing each others passes…  We skipped the “go up really high and then drop from the sky and hopefully don’t smash into the ground like a bug” ride as we didn’t want to climb the big hill.  We fed bears corn pops, ate pizza, saw whales, enjoyed the musical stylings of Walter Ostanek… and then proceeded to ride the Dragon Fire roller coaster 6 times or until I could literally hear my brain sloshing from side to side.

Jodi and I took Josh across the border for the first time and we ate dinner in Lewiston.. A few days later we went across again and took him to see the Trews and met my Twitter friend Nancy (@nannerland)… and enjoyed an awesome show and people who danced in puddles.  We also fed Josh old candy out of our purses because we spent all our money on beer.

In August, we went to Kitchener and had lunch with Randy Bachman and took him to Home Hardware (you can read about that here…) I did a very long interview with him.. which you can read about here…  then we watched Bachman-Cummings that night and it was AMAZING!

Chris (Katy’s BF) and I overruled Katy and Josh with our duet on American Idol. Yeah. Even Simon liked us.

After several years I finally saw my buddy Mike Lynch .. cause he too lives in St Catharines!   We had wings and beer and I learned where 2 more dirty St Kitts bars are.. check out his music..

Went to see the Gin Blossoms but not before I had to YouTube some of their songs cause I couldn’t think of any.  And we went to Top’s Friendly Markets. Steven was right. Sweet Baby Ray’s is the best damn BBQ sauce ever.

Went for a visit to the Ottawa Valley for my Aunt Pat’s 80th birthday party.. great seeing all the relatives and catching up with everyone. Much laughter and fun.  Also was able to hook up in Ottawa with more Twitter friends.. Lynda Partner (@lyndapartner) and Kneale Mann (@knealemann)… awesome!

One of the adventures of the summer was going to see Miranda Lambert and Kenny Chesney in concert.  Sure, the music was great… but before we even got there we had already survived a tornado touching down in downtown Toronto and me ripping out the seat of my pants.  Again, thank god for the Amex Lounge and people with expense accounts.

Had a lovely dinner at my sister’s with our cousin Maureen.. fun fun.

My friend Steven and I went to Lewiston’s ArtPark for the final blast of the summer to see Peter Frampton. Took Josh. This time I brought enough money that he could get pizza. There were THOUSANDS of people there. I don’t believe there were any fatalities.

The Germans.. Alex & Carl.. came to visit and we hooked up for a visit while they were here. Beer, conversation, laughter and more beer. And more laughter. Carl’s website is here.. he is the authority on heavy metal .. not just in Canada or Germany, but world wide. And he likes beer.  http://carlbegai.com/

There was also much barbequing, socializing and fun.  So even though the summer is over (I was in  denial for weeks, obviously..) the fall’s been pretty good.. AC/DC.. family celebrations.. Oktoberfest.. it’s all good.

Oh, and no, I didn’t hide a body over the summer.. however I did accidentally run over a possum.  Thankfully, it has not come back to seek revenge…..

One response to ““I KNOW WHAT YOU DID LAST SUMMER… “”