I have to tell you that at one point in my life on the internet I was a sucker. I know, I seem somewhat savvy and smart.. one who isn’t easily duped, shall we say.  However, when I first got the interweb via dial up about 15 years ago, I was a little more naive and gullible. It’s before I’d toughened up and got me some web smarts. 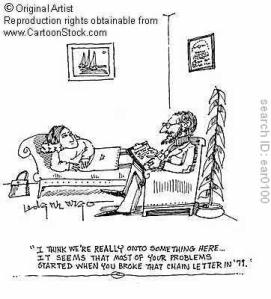 I can remember as a kid getting letters (remember those? perhaps you don’t if you are under the age of say, 40.)  Long, long ago… people would write things ON PAPER.. telling each other news and events and how they were feeling.  THEN they would put those pieces of information into envelopes and address them to whomever they pleased and then would put a stamp on them and MAIL them.  Sometimes it would take DAYS for the “letter” to reach the other person.  To which you reply.. “DAYS! Egads! How can that still be NEWS then! unless I get things INSTANTANEOUSLY it’s worthless!  After all, I stand in front of the microwave yelling HURRY UP!”    But, once again, I digress….

I would get letters from others that would instruct me to follow the instructions so as “not to break the chain”.  It could bestow huge blessings and riches upon you by following the instructions contained therein.  Upon my very first receipt of such a thing I made the requisite copies, decided who to send these to (anonymously of course..) and sent them out. But then of course, one of those people sent it BACK to me.. because after all, it was anomymous.  Therefore,  I would send out again.. and then of course get another at which point I’d give up.  The postage was killing me.  Truthfully, half the time I didn’t send it out on the first round.  I have a condition.  It’s called “postally challenged”.

But then came the world wide web.. and email.. and instant communication.  And for whatever reason, these same ridiculous chain letters made their way onto the interwebs.  Promises of untold riches if only you’d forward onto 45 friends .. and the threat of death, horrible injury, halitosis, athlete’s foot, giant boils and of course, never ever again being attractive to the opposite sex if you were to break the chain.

However, these helpful missives did of course help us with passing along valuable information that would protect us.. for example, I now know how to avoid waking up in a tub full of ice sans one kidney… that I shouldn’t visit 3 different tanning beds in one day for fear I will cook myself from the inside out…I should never let anyone help me with a flat tire as it is a sure sign that they are going to murder me.   Not to mention how I learned to stop flashing my headlights at cars whose lights are out as it’s a surely a gang initiation (not some poor guy who forgot to turn his lights on…)   Helpful stuff like that.

Then too, there’s the whole public service element.  Because you KNOW that when a child goes missing the FIRST thing a parent or law enforcement officials do is create a chain email. It should be extremely vague, not really indicate what the child was actually wearing nor give any contact information other than some email address.  This is the epitome of effective police work.

And, let’s not forget all the cool free stuff we’re all going to get through simply pressing send.. just this week I’ll be getting oodles of gift certificates from stores and restaurants, several free laptops and  a HUGE chunk of Bill Gates’ fortune.

There was one point early on that I “fell” for these things and would forward along.. worried that some sort of bad luck would befall me. After all, I was raised Catholic and you know how superstitious we are…   But it’s gotten out of hand. I’ve caught myself forwarding them again… just the somewhat entertaining ones about horoscopes and such… after all, you can never be too careful… however, the phone didn’t ring with some fantastic news, my secret crush did not call to confess his undying love for me nor did I lose any limbs.  However I know I likely looked like a bit of a superstitious fool to some.  So from now on, I’ll only be forwarding funny stuff.. or emails that don’t come with a “condition”.

I henceforth refuse to pass along another “good-luck-Irish-blessing-bloody-mary-curse-luck-in-love-better-forward-this-to-thirty-people-or-you-will-not-only-die-a-horrible-death-but-you’ll-never-get-laid-again” chain letter.

Your inbox will thank me.

(If you have any doubts whether something is “real” or not.. www.urbanlegends.com  or www.snopes.com or www.hoaxkill.com.)

p.s. posted a tweet about “bad luck” and emails on Twitter and @a_black_cloud immediately started following me. I blocked it. Can’t be too careful….

Life: Moving forward. And moving out of Barrie in one month. The countdown is on.
Love: Obviously, I am having issues with my love life because I did not forward along the “right” email.  Crazy cat lady, here I come.
Pants: Again, obviously this is part of the curse. Or coulda been that bag of Cheddar Corn.

3 responses to “Chain of Fools”